There are many chemicals in water, but not all of them should be present in aquariums. Fish owners should test their tank’s water regularly using aquarium test kits and treat the water accordingly. It’s all part of ensuring fish live in the safest, most natural environment possible. 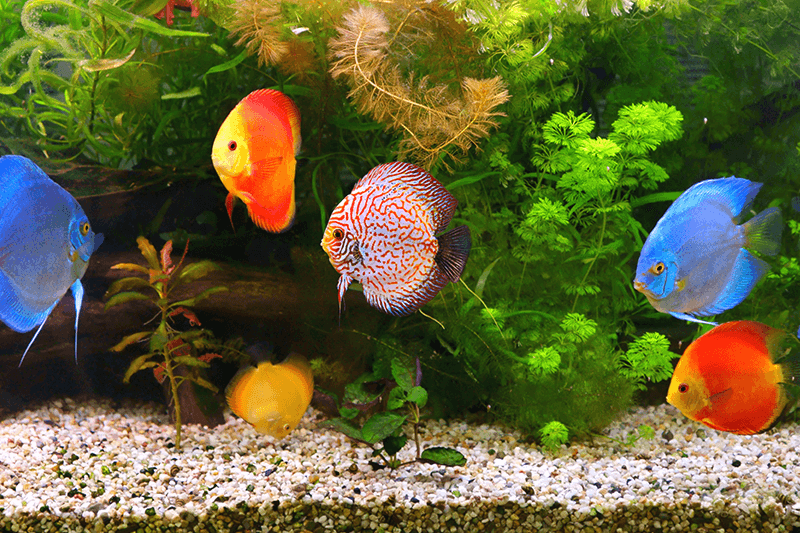 Tap water is treated with an array of chemicals, most of which are designed to make drinking water optimal for human consumption. Chemicals are added to eliminate harmful bacteria while others are added to provide health benefits or to make the water taste better or look cleaner. While these chemicals make tap water great for human consumption, these chemicals may not be so ideal for our fish. Trace levels of heavy metals can be found in most tap water while chlorine and chloramine cause problems for fish as well as being detrimental to the nitrifying bacteria we want to promote the growth of, in filtration units.

There are numerous test kits available for testing the quality of water in home aquariums. Some are vital to the success of the aquarium while others are useful for specific types of aquariums. Aquarium water should be tested regularly to ensure that the environment your fish live in is optimal and, even more importantly, stable.

The most fundamental aspect of water quality is the pH. This is a measure of the acidity or alkalinity of the water with 7.0 being neutral on a scale of 0-14 with lower numbers being acidic and higher numbers being alkaline. Pure water has a pH of 7 but aquarium water is affected by a number of factors that cause the pH to rise and fall. In much the same way, environmental factors in natural waterways cause variation in the pH to vary between locations meaning that different fish species have a preference for different pH. For example, many tropical fish found in South America and South East Asia live in water where there is a large amount of organic matter in the water. As this breaks down, acids are produced, lowering the pH. The natural pH in these areas is slightly acidic. On the other hand, many cichlids from the rift Lakes in Africa are found in Lakes where minerals in rocks are dissolved over time, creating a high pH environment.

In the aquarium, pH is lowered through addition of pH reducing chemicals, carbon dioxide (often used to promote plant growth), organic matter such as driftwood or peat moss and acids produced through metabolism (especially by bacteria). pH is raised through the addition of pH raising chemicals and mineral substrates such as limestone rocks or coral sand.

This includes ammonia, nitrite and nitrate, the products of the nitrogen cycle. Ammonia is a toxic by-product of metabolism, it enters the water in various ways including through fish waste, uneaten food and metabolic waste from fish’s gills. A healthy biological filtration system will process ammonia quickly and effectively. New aquariums will experience a rise in ammonia as nitrifying bacteria establish in the filter. Established aquariums experiencing elevated ammonia have usually had a change made to the aquarium such as new livestock added, increased amount of feeding or reduction in nitrifying bacteria which could be as a result of filter cleaning, medication or untreated chlorine/chloramine.

Nitrifying bacteria detoxify ammonia by converting it to nitrite. Nitrite is even more toxic than ammonia but like ammonia, it is quickly and effectively processed by bacteria in an established aquarium. In new aquariums, after ammonia levels begin to drop, nitrite levels will rise. This triggers a second type of nitrifying bacteria to develop which will continue to process all nitrite provided conditions remain relatively consistent. Nitrite spikes occur immediately following ammonia spikes and the cases are the same.

Once nitrifying bacteria have processed nitrite, nitrate is produced. Nitrate is only mildly toxic to fish and it is normal to have low levels of nitrate in aquariums which are diluted during regular water changes. Live plants can also help to reduce nitrate levels in aquariums.

There are two types of hardness that can be tested in aquariums, general hardness (GH) and carbonate hardness (KH). General hardness is essentially a measure of the combined total of calcium and magnesium in water. Calcium and magnesium are vital for many physiological functions and the necessary levels vary depending on where fish are from. Generally, fish from low pH origins will require lower GH while fish requiring high pH will also require a higher GH.

While elevated phosphate levels will not adversely affect fish, it will promote the growth of nuisance algae and make the aquarium look unsightly. Testing the water for phosphate helps to indicate whether phosphate reducing filter media may be required, or it might help to indicate when it needs to be replenished.

In order to maintain the optimum health of your pet fish, it is important to replicate the natural habitat as closely as possible. In order to do this, there is a wide variety of test kits, water conditioners, supplements and water treatments available. By keeping fish that are found naturally in similar conditions, this makes it easy to target specific parameters to keep all your fish happy and healthy.