Easy to care for and bright to look at – Tetras are a popular choice. Find out more about this this fish. 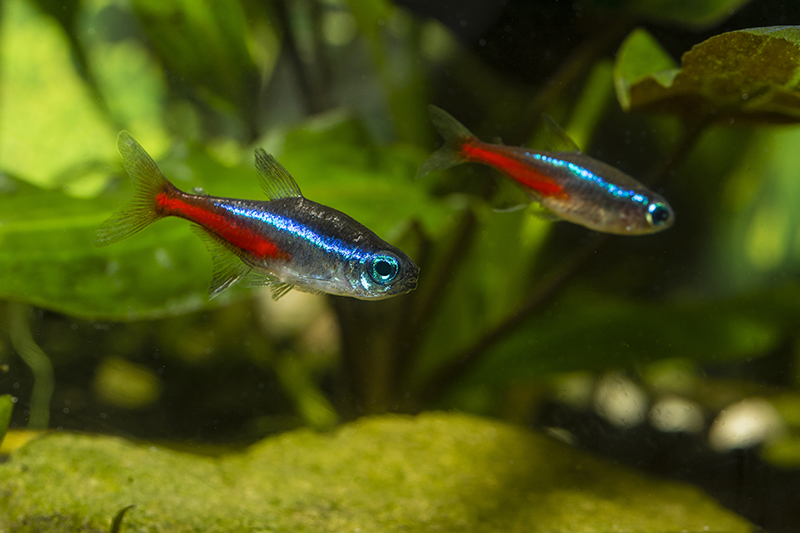 Tetras are one of the most common types of fish found in South America. Their name is commonly used for a large group of fish characterised by the presence of a small adipose fin between their dorsal and caudal fins. Tetras are the second most commonly kept fish in community tank setups, after Livebearers (you can find out about other popular fish here). They are popular because of their vibrant colours, manageable size, mild behaviour and schooling habits.

This species originates from subtropical and tropical areas of Africa and South America, typically from tropical rainforest rivers and streams. Their origin stems back to when the African and South American continents were joined in one land mass.

Range from two to 12cm depending on species. They can live from around one year for some small species to several years for larger species.

Many species tend to have a silver-coloured background to their body over which splashes of iridescent colours occur. There is a huge variety of colours such as the iridescent red and blues of Neon and Cardinal Tetras. The fins of many species also contain various colours and patterns. Today there are many species of commercially farmed Tetras that have different colour morphs (generally Albino or golden forms) or fins (long- or short-finned varieties).

The aquarium conditions required by these fish depend on their location of origin and cannot be generically listed. However, most Tetras purchased at aquarium shops are of South American origin and will do well in water that is soft and slightly acid.

Many Tetras are omnivorous and will readily take most types of aquarium foods available. Due to the small size of many species, ensure that food particles are not too large for their small mouths. Talk to your local Petbarn team member about optimal food options available and check out our range online.

Tetras are best kept in large schools (minimum six in the group) and different species can generally be kept together with few problems. Tetras will also mix readily with a range of species and are generally an ideal community fish – however as many species are relatively small, it is not a good idea to mix them with species that grow large such as Oscars. Some species can be prone to eating aquatic plants.