If you’re after a loyal, intelligent and very active dog, then a German Shepherd could be the perfect pet for you. 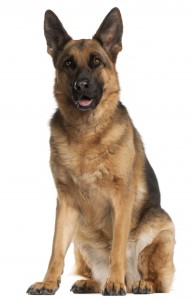 If you want a great watchdog and a best friend, the German Shepherd could be the breed for you. Bred for herding and commonly used as watchdogs due to their high level of intelligence, German Shepherds make great pets for active households.

Regular training for your German Shepherd is imperative for a well-behaved, sociable pet. They need both mental and physical stimulation daily because they are so clever. These dogs also benefit from large enclosed yard spaces. A popular cross-breed is the very intelligent and active German Shepherd cross Husky.

Rin Tin Tin, both have a star on the

This dog just wants to spend all their time with you and is best suited to households with people at home during the day. They have very high energy levels and are very alert, making them ideal watchdogs. They are extremely loyal and loving to their family, however take care to ensure young children learn how to interact with your pet respectfully.

They have a high level of shedding, but this can be reduced by brushing weekly. The average lifespan of a German Shepherd is between 9-13 years.

Scheduled six monthly health check visits with your vet are important to ensure that your dog is healthy and happy throughout all life stages. Common ailments include Hip Dysplasia and Gastric Dilatation (Bloat) problems. Together with your vet, you can determine and maintain a preventative health care program based on the individual needs of your canine companion.

How big do German Shepards get?

A German Shepherd is a medium- to large-sized dog, weighing between 30 and 36kgs, with a height between 55 and 60cms.

How much space do German Shepards need?

As large dogs, they need space to run around in. A backyard is ideal.

How much energy do German Shepards have?

Like a marathon runner, always on the go. A daily walk, run or game of fetch is a must-do for this pet.

How difficult are German Shepards to train?

Lots of training is essential for a well-behaved dog, however they are super intelligent and will quickly pick up commands.

Are German Shepards suitable for families?

Are German Shepards compatible with other dogs and animals?

If introduced early, your new dog will befriend other pets.

How much company do German Shepards need?

Your pet just loves you and wants to spend lots of time playing fetch and exercising.

What coat and grooming needs do German Shepards have?

Low-maintenance, just brush weekly and bathe when necessary. German Shepherds have a dual coat, often in black and tan with a black saddle. The undercoat is thick and soft and the outer is coarse and dense.

They shed a moderate amount of hair.

Do German Shepards have a tendency to bark?

They have a voice, but won’t often use it unless to say, ‘Hello’ at the park or at a stranger.